Friday Fives: Our Software Engineer Gulnara M. chats about being self-taught in code, diversity in tech, and artificial intelligence33Across2019-02-15T11:17:58-05:00
SHARE

Some of us can say that we taught ourselves how to ride a bike, or maybe even how to play an instrument. Our Software Engineer Gulnara Mirzakarimova took it up a few notches by teaching herself how to code! After a career in finance she decided that she wanted to do something different. Learn more about why Gulnara wanted to get into engineering, how we can improve diversity within the industry, and how engineers can prepare for the future of artificial intelligence! 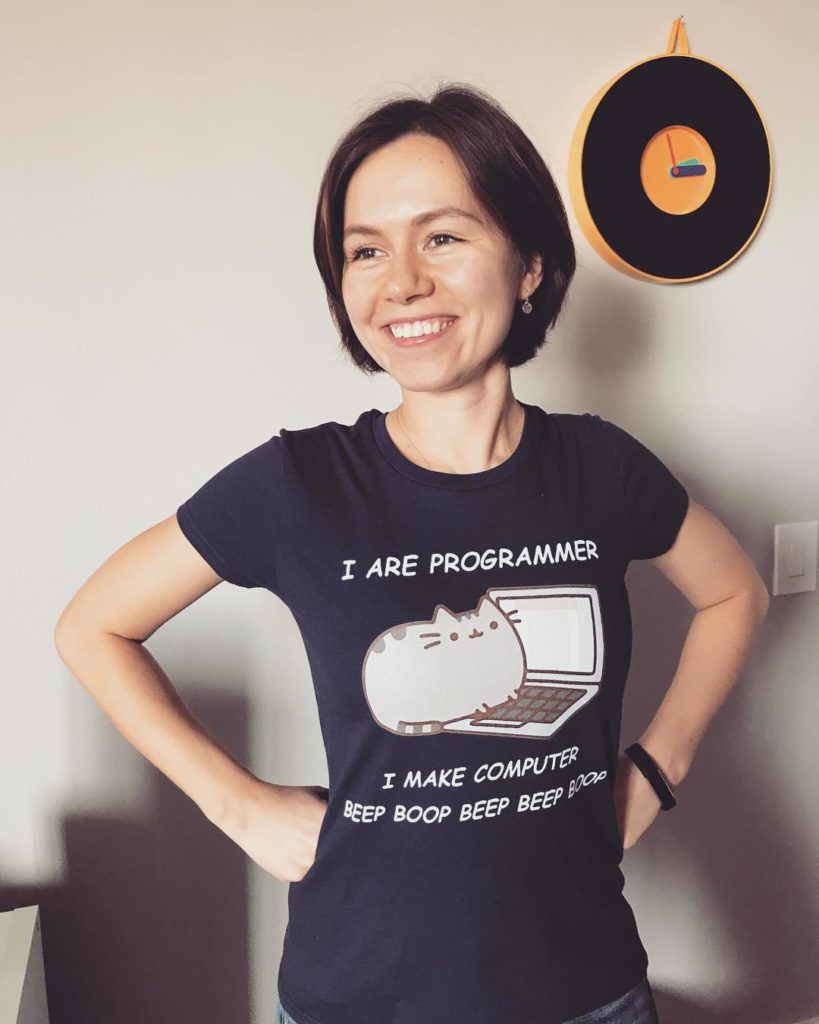 How did you make the decision to become an engineer?
I was working in finance for four years and I realized that it was not something that I was interested in. I wanted to be able to create things and have the flexibility to work from anywhere. I used to run a community group of entrepreneurs in Washington, D.C. and I liked what I saw. A lot of the members were developers and they were building some pretty interesting things. I then decided to learn how to code, while still working in finance and I loved it. So, I quit my job and began working as a developer. This was five years ago and I have been working as a developer ever since.

What is the best work environment/setting for you to be at your most productive state?
I work from home 90% of the time. Sometimes I’ll work out of a coffee shop. I like to be able to tune out sound and distractions when I work so I use noise canceling headphones. Depending on what I’m building, I like to be able to listen to either classical or techno music. I’ve noticed that if I am in an early stages of conceptualizing the problem I tend to listen to  slow classical music. But when I have the solution figured out and am implementing it, I switch to high-paced techno music. In both scenarios, I like to work uninterrupted. The main reason can be explained by this comic.

What role do you think that artificial intelligence (AI) will play in the future? How should engineers prepare for it?
Tech is developing faster than we can keep up. New tools, languages, and frameworks are being created all the time. There are a lot of tools available for engineers to prepare for AI, they include data science, machine learning, and deep learning.

As a female engineer, what do you think could be done to encourage more women to explore the profession?
I think we should not only focus on women but on all minorities and it has to start early – I am talking primary school. How can you be interested in something you don’t know anything about? I recently gave a talk at a middle school where I told kids about what developers do and told them that there are lots of ways one can become a developer. Kids have some idea of what teachers, doctors, lawyers and bankers do. But the tech industry is still a pandora’s box to many of them.

What’s your favorite way to spend the weekend?
I don’t have one favorite way of spending a weekend. But you can usually find me doing the following in any given month on a weekend: sketching and painting with watercolors, hiking, or going to a botanical garden. I like visiting Harry Potter World and Jurassic World at Universal Studios. I also enjoy barbecuing, baking and of course binge watching TV shows. I’m currently watching The Expanse, Killing Eve, and WestWorld.

Friday Fives with our Director of Client Success and Data Partnerships, Jamar Demorin

Friday Fives: Our SVP of Operations and Analytics Talks Monetization, Improving Yield, and His Love Of Napa Valley